The attached graphic from the current Rexer Analytics 2012 Data Miner Survey finds Mathematica's market in analytics ranked 13th - that's pathetic - below R, SAS, SPSS, Matlab and others, with only a sliver of practitioners using Mathematica as the primary tool.

How can Mathematica.SE be used to increase awareness? I understand SE is a Q&A site, not a marketing tool for Wolfram. On the other hand, all users of Mathematica likely benefit from an expansion of the ecosystem. 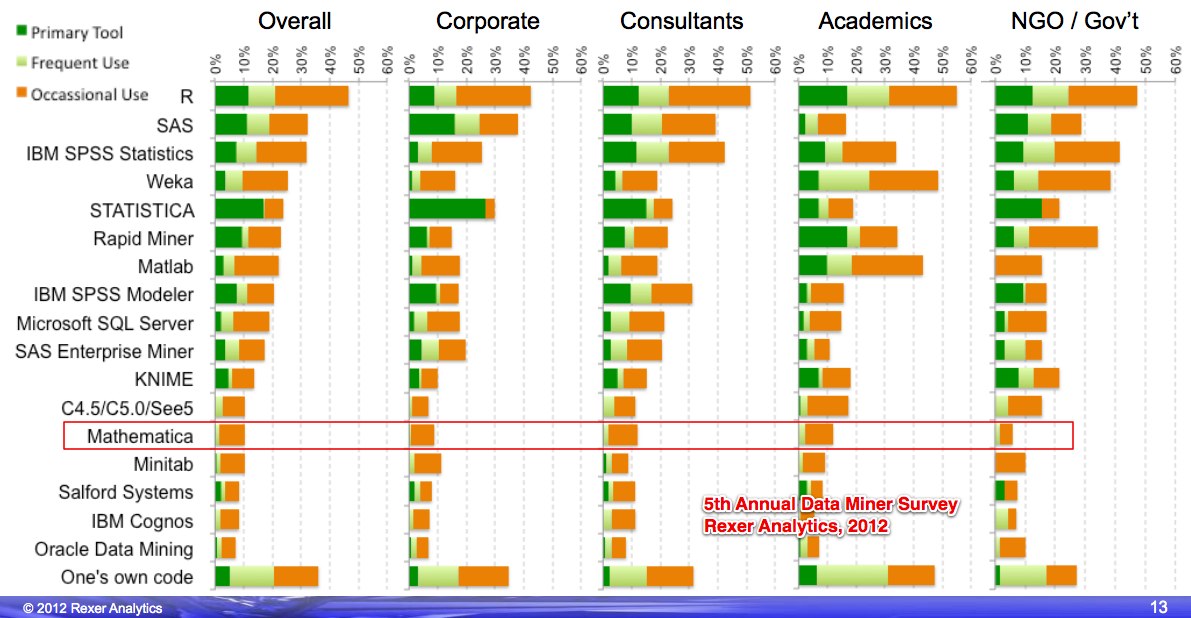 Not an answer to your question, I'm afraid, but I'm firmly of the opinion that increasing Mathematica's reach in market X and field Y is strictly beyond the scope of this site. Such a joint undertaking on this site (if it were to happen) would also be complicated by the fact that user A and user B probably won't agree on the same X and Y.

This is solely WRI's responsibility, and they were fairly late to the game and introduced some much needed statistics/probability functionality only in version 7 and expanded in version 8. Same is the case with image processing functionality. In contrast, MathWorks has had statistical and image processing toolboxes (among several others) available for quite some time now. If you look at these facts, it's a no brainer as to why the adoption rates for Mathematica are so low — most people have had to roll their own, which is not fun when there's a reasonable and easy to use alternative that packages it all for you.

With that said, there is something that you (or someone else) can do (and the community can aid):

Eventually, if it is good, it'll gain the acceptance of users, who'll then probably convince someone using MATLAB/R to switch (it'll be a while before that happens for statistics/analytics, but it could be faster), who'll then... you get the idea.

Maybe one problem with SE is that its question format is more amenable to negative than positive messages about the software: after all, people ask questions because they can't figure out how something works, not because they're happily producing brilliant results.

Of course the answers can be where Mathematica might show off its capabilities. However, the questions have to come first, and the answers are constrained by the question topic. And it's hard to justify making up an artificial question only to be able to point out how great something works.

Maybe the Mathematica SE blog would be a better place where you could try to address your favorite field and show application examples etc.

Of course, there is also the possibility that Analytics can't really be done well with Mathematica on a large scale. That would explain why the chart you show has "occasional" use as the dominant mode - because Mathematica proves useful mainly for prototyping, as it does in so many other fields...

Generally I agree with R.M and Jens. It isn't the responsibility of this community to do Wolfram's marketing work. Wolfram is already promoting the product in the data mining / analytic space.

If you want to make a comprehensive case (without being too gushing) for using Mathematica for this purpose, I would suggest writing a blog post.

An alternative might be to post a self-answered question or two on a specific issue, e.g. "How can I do factor analysis in Mathematica and are there any tricks to be mindful of?" The answer would then show how this can be done.

5
Tag for questions regarding Mathematica's design
27
Toward Mathematica.Stackexchange analytics
25
Can we improve the quality of posts with tag differential-equations?
10
Help with formatting posts
15
StackExchange ethos; help with caption
2
Can you help me at formulating question on “which function uses this data and output this scalar value”?