I'm Jin, I work on the designs for the Stack Exchange sites as they graduate from the beta phase. Each site will have its own unique theme that will reflect its topic and culture. However, all sites will share common elements so they feel like they're part of the Stack Exchange family.

I have to admit I was a bit nervous when I first started to brainstorm for the design for this site. I really know nothing about Mathematica. The last math tool I used was Maple in college, many years ago. My concern went away rather quickly after I did some research on the associated aesthetics with Mathematica and its community sites.

For the overall feel of the site design, I think a clean and minimalist look is most fitting, to resemble the main WRI's site. Therefore the logo should be more vibrant in color and geometrically intricate. While I was trying to come up with some logo concepts on my own, I was informed by people in the chatroom that there was an unofficial Mathematica.SE logo that's been used in the community Ads. 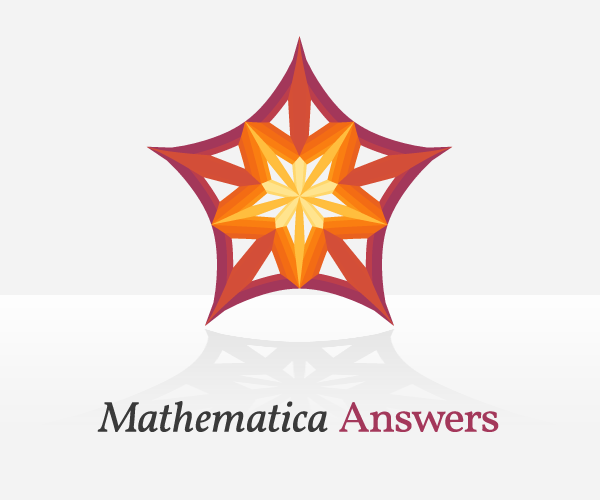 I immediately fell in love with this logo design. It's energetic, vibrant and bears some resemblance to the official WM logo but has a flare of its own. More importantly, it's purely generated by Mathematica. I think this is the first time a SE community designed its own logo! Credit: Wxffles designed the logo, which was tweaked by J. M. and coloured by Verbeia. Also thanks to Szabolcs and J. M. for providing me with the vector file.

For the rest of the site design, I picked the colors from the logo as accent colors. The design goal, as mentioned above, is to keep things simple and clean.

please click on images to view the full resolution versions. 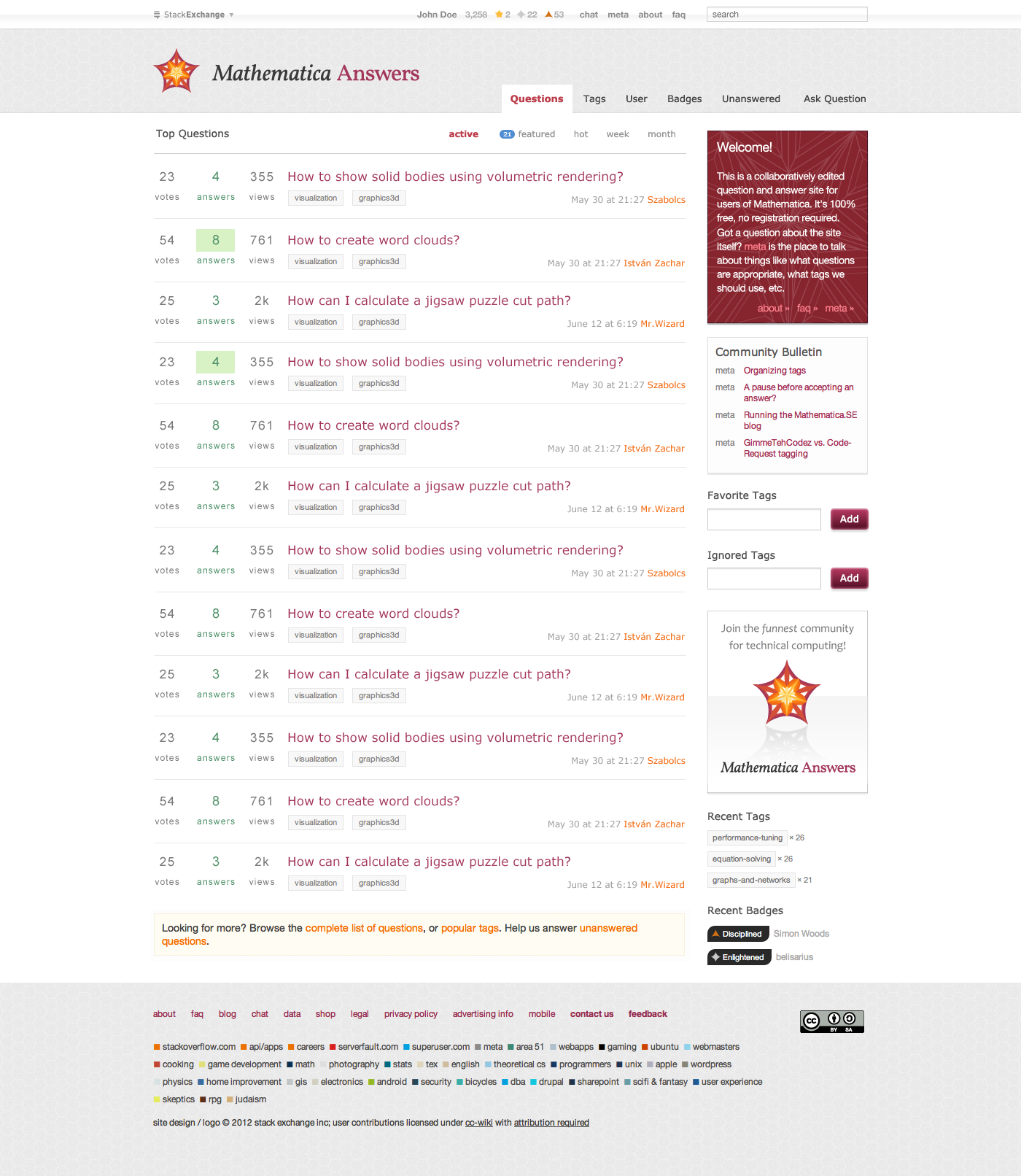 For some design elements I subtly mimic the look of the WRI site.

The site design is only part of the whole design package. Once the site graduates, its chatroom, twitter account page, newsletter, and network Ads will get a facelift as well. Outside of the digital realm, I'll be creating Mathematica branded goodies too. Below are some mockups: 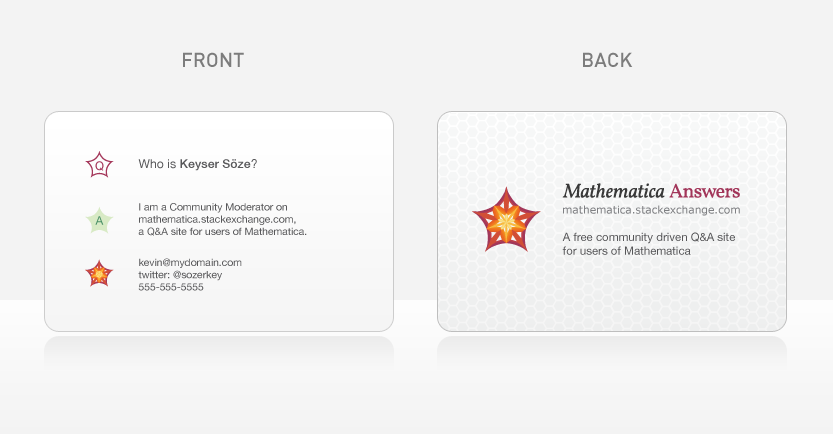 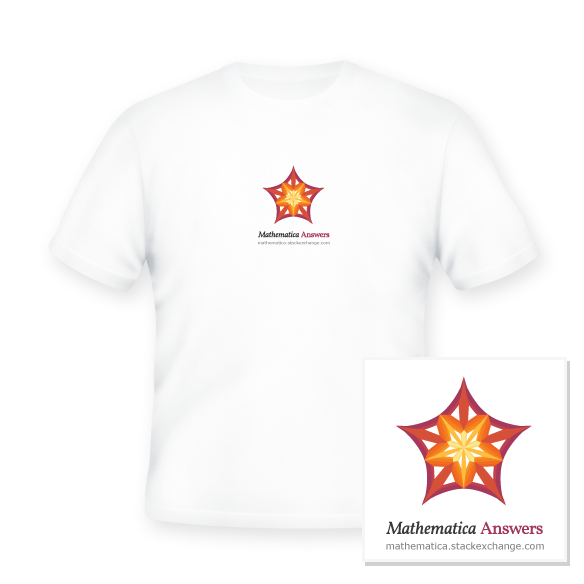 I'd love to hear your feedback. If there are no major design changes, I'm aiming to launch the site next Tuesday or Wednesday. An early congrats from me!

EDIT: I have updated the mockups. Fixed typo on the cards and sidebar banner. Also updated the badge icons and the favorite star on the question page. As of now, I'm not totally set on the subtle background pattern used in the header and footer. I really like the Penrose tiles Verbeia made in the other thread. If I can get a tileable version of it, I'll use it.

Q: "I'm a moderator, when will I get my Mathematica mod cards as shown in the mockup?" A: After the first official election after the site graduates.

Q: "I want to get some mini-cards to pass around to my colleagues or classmates to promote this site, how do I get them?" A: The mini-card in the mockup is simply for mockup purpose right now. After the site graduates I'll start to create "real ones." I'll let the community decide which 3 most interesting questions to use for the mini-cards. I will make another post on this topic.

Q: "I want that t-shirt in the mockup, how do I get it?" A: typically a few months after the site graduates we send a "swag package" to the top 2 page users(sorted by reputation, all time). The package will include Mathematica t-shirt, stickers, mini-cards as well as Stack Exchange branded pen, sharpie, marker and stickers.

I love this, and I'm so pleased that the logo could be the beginnings of such a lovely design.

Maybe someone can come up with something nice in Mathematica for the tiling pattern? I don't have time right now but maybe someone does?

EDIT I have a few suggestions for tiling in an answer to the earlier question about the site design.

Firstly let me offer my thanks for all your hard work. The design looks great!

I agree with all the answers given so far and also with R.M's comment about the text color. The latter will be the subject of this answer, because obviously color preferences are very subjective and I'd like to see whether others feel the same way. I'll mention up front that I'm using an uncalibrated TN panel, so it's entirely possible that I'm not seeing the design as intended and that my comments below would become immediately invalid if I went out and bought a color calibration device. But because most people won't do that, I think a strong consensus view is especially important here.

In my opinion, there's a subtle clash between the plum color used for question titles, logo text, "Add" buttons for the tags, and the links at the bottom of the page, and the burgundy color of the "Welcome" panel and the "Questions" and "active" headings. These colors are very similar, but not exactly the same, and to me the design would feel more consistent if the same color were adopted for both sets of elements.

With these general comments out of the way, please vote yes or no for the following!

Personally I prefer the burgundy as it stands, although for better contrast it could perhaps be just slightly darker. Similarly I would be open to a slight darkening of the shade of orange used for the posters' names, to approximately match the color of the bronze badge.

Finally, it seems to me that the visibility of the hexagonal tiling is strongly dependent on the gamma settings of the monitor in question. I find it marginally visible on a Samsung SyncMaster 2343BW and almost invisible on an Iiyama ProLite E2274HDS, both of which have the manufacturer's standard sRGB profiles installed and R/G/B gamma each adjusted by eye. Neither of these are particularly good monitors by any means, but I think they're fairly representative of what most people will have on their desks. As such I think a bit more contrast could be beneficial for this design element (which, I must say, is really nice and deserves to be seen).

Jin, first a big thank to you not only for the hard work, but especially for including us in the process! I really like your design in all details, but since you asked for constructive comments, let this comment be about...

As far as I have understood this, you took the colors from the logo, since they look nice. Although I basically support this, let me point out some things. First, the colors for the logo where take from one of the color gradients of Mathematica. These "SunsetColors" are beautiful but they don't contain all colors we need for the site and they are not designed to look beautiful on a website.

That's why in my opinion the green in your screen-shots does not really fit with the red.

Wouldn't it be better to do this the other way around? You choose the site colors so that they play really nice together. Then we can really easily create a color-gradient from the red tones and colorize the logo.

With this approach, you can ensure that the site-colors follow some rules (share some lumination properties or follow some rules in color-space). If you look for instance on the solarized colors you may notice the difference.

Most posts on Mathematica.SE will have a lot of code. You surely noticed our highlighting for the language. It would be really nice, if you could choose some colors for the codeblocks which will fit perfectly into the rest of the design. Currently we have

If you could provide those tones which fit with the gray of the code-box and the overall design, this would be awesome.

24
What should our site design look like?
21
New Design Launched
12
What would be a good community promotion ad?
21
Review and discussion of our new design
5
Mathematica Moderator Business Cards

4
How is the appearance of the site determined?
12
What would be a good community promotion ad?
3
New Beta Theme Launched
24
What should our site design look like?
21
New Design Launched
0
Mathematica updated site theme is ready for testing!
3
Community Ads for 2021