Should we consider the vote count when voting?

It has probably been already raised in some meta over SE. The question is, should we vote "relatively", i.e. based on if the question/answer is useful/well-written/etc., or "absolutely", i.e. by assigning a reasonable value to the question and voting in that way.

You should vote as if you would not see the absolute votes already given. This is my strong belief. The final result in votes should be a sum of the single decisions of the community.

If you look at it closely, everything else does not make sense. If you see a question that is written well, intriguing and probably a thing you always wanted to know, why on earth should you downvote it if it already reached the upper limit of upvotes? Don't do that. Even if it means we have to live with a buttocks-question that has close to 300 upvotes.

Far more interesting is to try to embrace a consistent voting style. Especially for questions, because it seems there is a tendency that questions sometimes don't receive the voting attention they should get. If I see 4 answers to a question that is at least OK, and there are no votes for the question itself but upvotes for the answers, something is off.

In my opinion, votes should reflect how many people find this question/answer interesting/helpful. The worst thing that can happen is if no one cares anymore and no votes at all are placed. Then, our site will go down the drain. You might have seen my little analysis of votes in our chat recently. 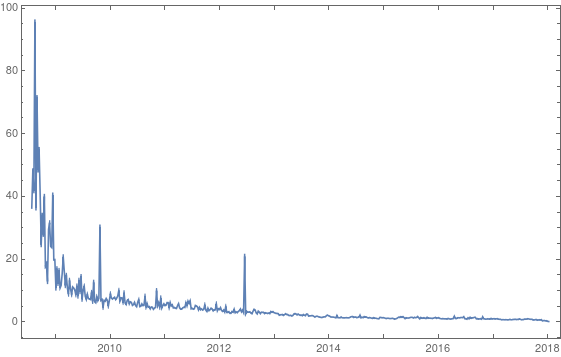 This is the mean of votes per week on c++ questions on stackoverflow. As you can see, the c++-tagged questions don't receive any attention anymore. If you visit stackoverflow, you will find that it turned into a rather hostile environment that is unfriendly to newcomers and will push users away.

Our site has developed a similar tendency. Here you see the percentage of questions that have no answer and no vote. There are things to consider as apparently dead questions are deleted by the system after a while, but the tendency is clear. 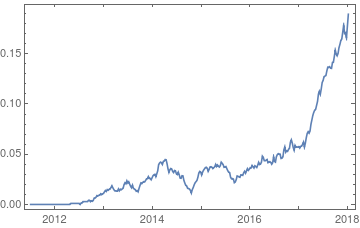 If no one votes, we will become an ignorant community. Therefore, as soon as I have read a question or answer, I try to place a vote. My votes are relative. If it is good, it gets an upvote. If it is a bad answer, I downvote. Bad questions rather get a close vote and a comment.

I vote with users in mind. Here are some voting patterns which are in my past, even though it is hard to say how often or frequently I have used them.

If there is a question with zero votes that isn't inherently a bad question then I'll vote on it just to signal to the OP that the question is well written. If I ask OP to change something and he does it then I will vote for the question even though it is still not that good. If a question is undeservedly downvoted then I'll vote for it to show OP that not all of us agree with that. If the best answer has fewer votes than other answers then I'll vote for just that answer even though the other answers are also good, for future vistors' sake and for the answerer's sake. As a corollary, if I have voted on one answer then I will also want to consider voting for the other answers even though it may not have been those answers that caught my attention. This way I am not party to creating an imbalance where there shouldn't be one.

Note, however, that: Just because I sometimes do these things it does not mean that it happens very often. Usually I end up voting based only on the quality of the post, simply because none of the scenarios above are applicable.

I have a lower bar for voting on posts with few votes or no vote at all and it may equally be perceived that I have a higher bar for posts with more than a few votes. But I want to make it very clear that I support voting liberally. We absolutely want to be a community that votes a lot. The problem is that if we try to be consistent and create a baseline for what is worth an upvote, then some opportunities will be missed. I prefer to use my own judgement to e.g. encourage new users rather than to be rigid about it.

Downvotes is an interesting type of vote that has to be considered separately, because its effect on users is different. I have cast 3966 upvotes but only 22 downvotes at the time of writing. I don't see the point of downvoting a post, it just puts the user down. If I a have to criticize a post then I would rather leave a comment so that I can at least make it constructive. But, as Szabolcs commented to another answer here, it would be particularly bad to downvote a question that already has several downvotes. There is no need to pour salt in somebody's wound.

I would never use a downvote to even out a perceived imbalance of votes between answers. The significance of the downvote as I think of it makes that impossible.

It is obvious from what I have written that I vote "relatively," and yet I don't think anything that I've written here suggests that I am creating the problem of apathy described in halirutan's post, i.e. that questions and answers don't accrue as many votes in total anymore. But I feel like the analysis of why that trend exists is best left for another answer to another question.

Finally, I don't care how others vote, if they vote relatively or not. The one thing I would strongly recommend is that everyone keep their bar for what is worthy a vote low and vote frequently.

Not the answer you're looking for? Browse other questions tagged discussion voting .

5
What should be done with trivial code-checking questions?
8
Can/should we have additional reasons for closing?
6
This is indeed a rather strange unupvoting pattern, Holmes
23
Migration proposals (from StackOverflow to Mathematica.SE)
4
Settling disagreement
11
Are questions about SystemModeler on-topic?
26
Your answer up-voting policy
15
How to deal with questions that take excessive research effort on behalf of the answerer just to understand it?