I have an API connection to stack exchange (and implicitly the Mathematica stack exchange) which I use in day-to-day Mathematica usage, but which I've recently been using for things like calculating the average user reputation (500 for users with >100 reputation, 176 for absolutely everyone, for those who were wondering) and other fun stuff like that.

I was wondering if there's an official collection of stats like that so I can check mine against those to see what sorts of things my API connection misses. Is there such a collection?

This is admittedly off topic, but interesting:

Here's the distribution of user reputation as of 1/6/2017 (with 101 mapped to 1 because the vast majority of people with reputation 101 have it due to the association bonus (trust me, I plotted it out and there's a huge plateau at exactly 101)): 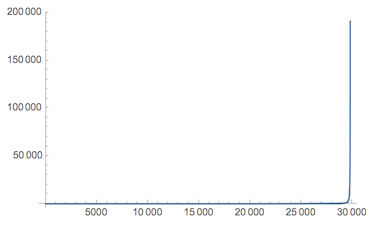 And here's the same thing log-plotted so Szabolcs and Mr.Wizard skew the distribution a tiny bit less: 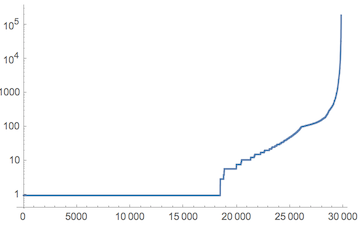 And here's the PDF plot of the estimated `WeibullDistribution of user reputations (chosen only because the docs had a picture that looked kinda how I expected the distribution to look): 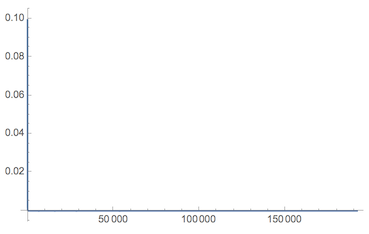 To quote march in the comments: "that's what we call a skewed distribution!"

I compressed all the user data (It's missing the last 325 users, but they all have rep 1 and so don't affect the statistics too much) and have dumped it here. If that file ever goes down just shoot me a message and I'll re-upload it.

The StackExchange Data Explorer has a large collection of queries that you can run and compare your own results with.

For example this query shows that the average reputation of users with more than 100 reputation is 490, which agrees well with the number you found.