The consensus for handling posts about fixed bugs was to include a line stating in which version the bug went away.

I would like to propose taking this one step further, and standardizing the header of bug-posts. This will serve the purpose of making it easier to search for bugs based on status or version, both for regular site users and for Wolfram.

I suggest keeping to the following rules:

These two criteria are already satisfied for most bugs posts, so they won't create an unnecessary maintenance burden. See an example.

Thanks to this, @Pickett was able to create a tool that makes it easy to search for bugs by status. It outputs an interactive HTML page that looks like this: 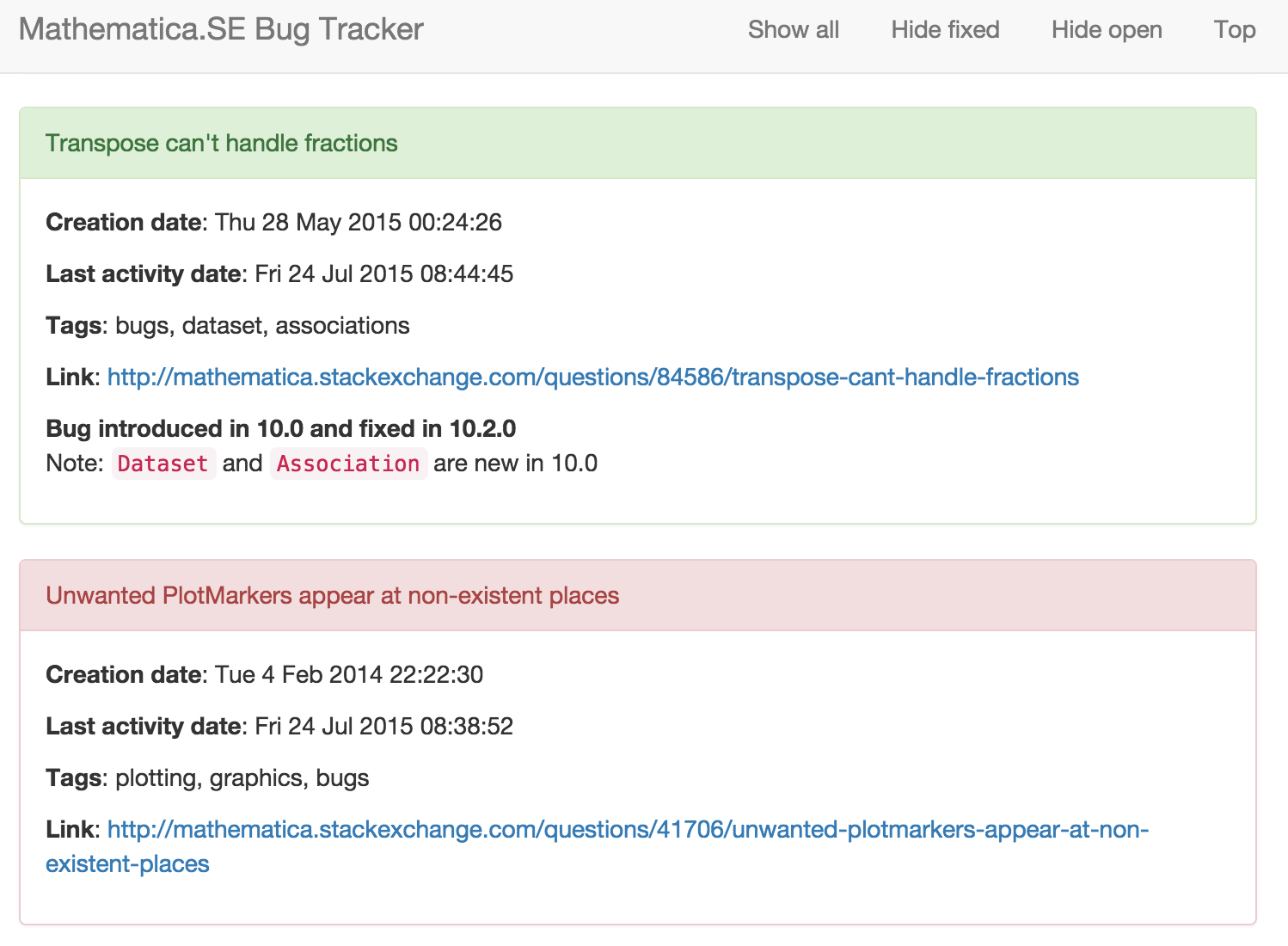 Notice that it also extracts the header line when it detects the word fixed. It would be even better if it could also detect headers without this word based on some other cue word.

I am awaiting for proposals for an easy-to-copy standardized header. We should not be so naive as to expect that everyone will rigidly keep to this template (which is why I only suggested the two simple rules above as strictly necessary), but having a template to refer users to will make things work more smoothly.

I have been using this format:

Bug introduced in X.X and fixed in X.X.X

And for open-ended versioning:

Bug introduced in X.X or earlier and persisting through X.X.X or later

I chose not to use minor version number for the introduced mark as often that is not quite certain. (People may keep earlier versions installed but usually only the last point release.)

24
Should we ask for tag warnings?
19
How should we tag longstanding bugs that have been fixed?
6
Is the wolfram-programming-cloud tag appropriate for a question that is specific to the WPC?
10
What are reasonable ways to suggest to certain individuals not to make dozens of minor edits at nearly the same time?
7
How should we tag version-dependent questions?
12
Is there a list of bugs identified by the Mathematica StackExchange?
-1
Place to collect the most egregious bugs, flaws and deficiencies of Mathematica?
8
How to write the bug banner for different bugfix versions?
1
Suspected-bug Tag

13
How can I easily copy Mathematica code for use with this site? (We have a palette for this!)
19
How should we tag longstanding bugs that have been fixed?
8
Ask Question - Tags box: Placeholder
3
Standard header for bugs-tagged posts V2
0
Mathematica updated site theme is ready for testing!
21
What would be a best soft to write a Mathematica&Mathematics based book?
26
Linting - Code analysis for bugs, errors and style issues in the Wolfram Language
7
Separating algorithmic optimizations from implementation optimizations, how to best ask these questions on MMA SE?