This is actually an old question that I asked in the chatroom but got no satisfied solution.

I can't remember when this began to happen, probably not from the very beginning, but when I noticed, I had been waiting for my computer's reviving everyday for a minute or so when I visited Mathematica.SE for the first time that day.

I admit I've already got used to this, I've developed the habit to drink a cup of water and so on to kill the time, but today I suddenly sobered up: I should ask this formally in meta, to make sure if there is really no way to relieve this, or to draw more attention to this issue if it's currently incurable.

I use Vista 32bit, Chrome 40, on an old 2GHz dual core laptop with 2GB memory. The problem appeared at least from Chrome 25.

Oleksandr R. mentioned that he suffered the same issue in the chat room. Don't tell me we're the only two!

Chrome comes with awesome developer-tools that let you profile and record what is happening on your machine. Have you tried to use them? Open the dev-tools with Ctrl+Shift+I and go to Profiles. Make sure you have one of the problematic SE pages as favorites in your toolbar so that you can navigate easily to them.

Try "Collect JavaScript CPU Profile" and press Start. Navigate to the SE page and wait until it is finished. After this, you can see which script requires a lot of time and you can access which function is the most expensive

Additionally, note you can turn on rendering information that are directly drawn into the web-site. 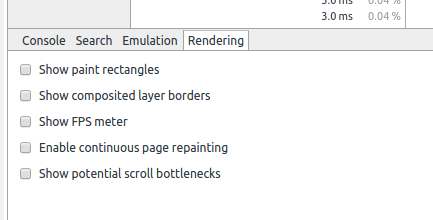 Try to turn on everything except of "continuous page rendering". This might give you additional clues.

Not the answer you're looking for? Browse other questions tagged .

11
On removing community-wiki status
21
What are the qualities of a good Question?