I am not aware of any published Mma benchmarks for the new R2-D2 2014 Mac Pro, so I thought it might be of interest to other Mac fans to see some Mathematica 9 benchmarks.

My machine arrived on Friday 24 Jan (fortuitously, on the exact 30th anniversary of the launch of the Mac). It is easily the coolest Mac ‘desktop’ I have ever owned, and I have owned most of them over the years, including the magnificently silent Cube. The Cube, however, was always underpowered for its time, whereas R2-D2 feels like a little nuclear hotpot out of … well .. Star Wars.

The comparison here is:

There are thus 2 obvious factors to give a speed boost for the new machine (even if other things were equal):

… test (from a fresh start-up) yields:

The improvement seems quite impressive ... and a little better than I was expecting.

However, I am not convinced that the Mathematica 9 Benchmark test is at all a realistic measure of actual performance one is likely to see. My impression is that the computations in the test suite are unnaturally well-disposed to massively parallel computations, which is unfortunately not what happens in real-life day to day calculations (well, not mine).

We have a standard set of benchmark tests we use for comparing performance under different numbers of kernels running mathStatica with Mathematica 9 (here computed on the old 2008 Mac Pro) as per: 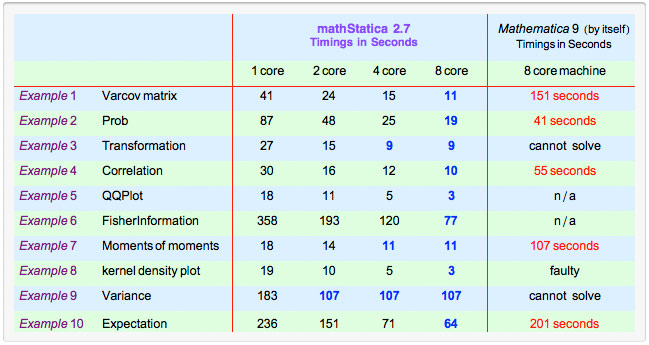 Unlike the Mma Benchmark suite, the mathStatica test suite calculations have a far greater emphasis on symbolic algebra calculations … in particular integration … and typically problems that involve solving multiple numbers of integrals simultaneously (so, one sees benefits from parallel computation, but as in the real world, sometimes these benefits max out at 2, 4 or 8 integrals/processes).

Here are the results for the 10 mathStatica test examples:

The above table provides a better representation of the types of symbolic problems I tend to solve using Mathematica. The resulting performance improvement … given 6 years of hardware technology advancement … is, I think, on balance, frankly somewhat disappointing. For these calculations, the performance improvements mostly fall into the 15% to 30% faster range … which is really just the faster clock speed at work. [ For these types of problems, one obtains clear parallel advantages usually for up to about 6 or 8 processes, but the range of problems that benefit from additional processes gets quite restrictive. ]

In brief, the old 'version' of Moore’s Law that provided doubling of performance every 18 months appears to be sadly over.

The Mathematica 9 benchmark suites suggest the new R2-D2 2014 Mac Pro is more than twice as fast as the old 2008 Mac Pro, but these results appear to be unrealistic and rather wishful, unless you live in a massively parallel universe. The improvements for symbolic performance seem a little disappointing, given the 6 years of hardware technology advances that separate the 2 models. Nevertheless, I must say that I am delighted with the new machine. The real performance improvements are not so much on the CPU, but in the way applications snappily open up (super fast SSD replacing hard drive: about a dozen times faster for large file copies), and the fast GPUs (which, unfortunately, Mma does not seem to take much practical advantage of). It is also dramatically quieter than the old Mac Pro … but alas definitely not silent, contrary to the claims made on many review sites … the single fan is most definitely audible. Perhaps I have a quieter working environment than the usual, or am more sensitive to such things.

7
Organizing tags
21
New Design Launched
15
What should we do about the abbreviation MMA?
15
Same old, same old
0
Where is the Search engine on the new StackExchange Mathematica site?
7
Separating algorithmic optimizations from implementation optimizations, how to best ask these questions on MMA SE?