Looking ahead to Wolfram Language

Wolfram has been making some big announcements lately regarding Wolfram Language which seems--for the most part--to be Mathematica-"language" accessible from other interfaces. Browsing through the documentation, I see some new functions and ideas (ex: Association) that we currently don't have. What are the plans for Mathematica SE if we start seeing the traditional Mathematica language in other areas?

There are three separate but interrelated questions here, touched on by the other answers and the many comments.

My own answers to the above three questions are “yes”, “yes”, and “possibly a bit more than we are currently doing”.

My rationale for answering “yes” to question 1 is that the Wolfram Language implementation is essentially equivalent to the kernel in the Mathematica application, or maybe a future version of it. There are also questions about the Mathematica front end that are explicitly on-topic (and were a lot of the reason why the Mathematica community could never have stayed on StackOverflow). There is a question about whether other “front ends” are on-topic; I don’t have a strong view on this.

On question 2, I think we are already getting an uptick in interest in the site because of the Raspberry Pi publicity. We could find a way to capitalise on this.

I sympathise with the frustration about the way Wolfram Inc markets its products. You only get to cry “New Kind of Breakthrough” so many times before people stop listening. In many ways, this site could serve as a source of less-hyperbolic advocacy, making the practical case for Mathematica the product and the related Wolfram technologies. How exactly we go about that, if indeed that is what people want, is a matter for a separate meta thread and/or chat event, I think.

I agree that it's a "New kind of Marketing" for Mathematica, but in my opinion its a important steep towards make Mathematica more known in the traditional programming community. Today, I believe that 99,9% of programmers think in Mathematica (when they know it exists!) as an tool for Physicist and Matematicians, and Wolfram wants to break this concept, making it an really language. I like to call it W, just as we have R. :)

When I see Tiobe list today, I get worried about the future of Mathematica, and I fell Mathematica really needs a new strategy to reverse that. I agree that language rename is a nice try.

I have send an mail to Tiobe, here is my question:

I would like to know if Wolfram Mathematica could not participate. I think that with wolfram alpha it gets a little bit more popular no? It has a very active google groups forum and exists since 1988.

Thanks for your feedback to our TIOBE index. Mathematica has been tracked for almost 10 years now. Currently Mathematica is at position 128 down from position 118 last year. In the past it was quite popular but as you can tell from the attached trend graph its popularity is declining. I hope that this answers your question. 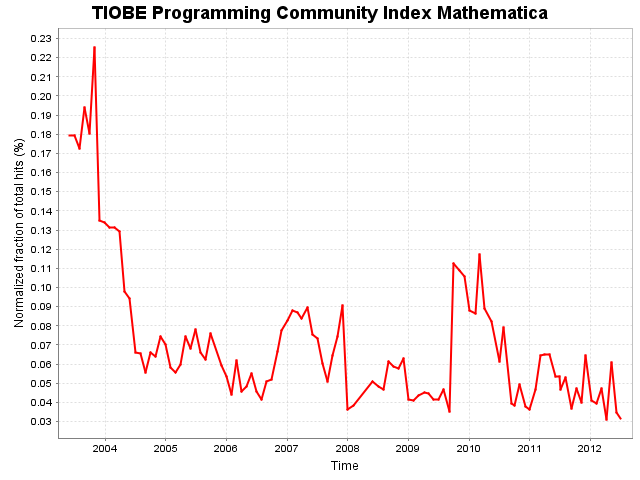 Let's see what the future bring to us.

The more I think about this, the more I agree with the "New Kind of Marketing" assertion. I also agree with other assertions that Wolfram Language really isn't a good name for what amounts to the Mathematica kernel + a few new features that we'll no doubt see in v10.

As an engineer in an industry basically run off of Excel, Mathematica really gives an upper hand in manipulating large amounts of data, and using the extensive, high-level language to present that data in forms that provide a greater level of understanding or provoke "New Ways of Thinking" (trademarked, probably). It would behoove a lot of people to at least augment their Excel usage with a little dose of Map, Apply, and f[x]:=f[x]=expr.

But in reality, I'm the only one that religiously uses Mathematica in the entire company. Not because of lack of licenses or accessibility, but because--I think--of the steep learning curve and the relative obscurity ("I didn't know we have MATLAB license here???..."). Despite the acknowledgment of Mathematica's power, there still seems to be hesitation at taking the plunge to become somewhat fluent in the language.

So, if we take Mr. Wolfram at his word, and despite the rather verbose new marketing nomenclature, if Wolfram Language increases the use of what we think of the traditional Mathematica language, then I'm all for it. Even if that means expanding the scope of questions fielded here at M.SE.

First of all we can enjoy with expanding Mathematica territory. So far we have been ignoring questions about e.g. WolframAlpha which were not concerning Mathematica explicily. I think this policy should be still valid not only with respect to WolframAlpha but to every new technology which is somehow related to Mathematica, e.g. if one asks about the Association function such a question should be concerned to be off-topic untill it is a built-in function in next versions of Mathematica.
I guess that WolframLanguage and Mathematica overlap in 99.5%, so rather there is no real problem. Renaming Mathematica is concerned by M.SE users as a marketing trick. These comments: 1, 2, 3 by Andreas Lauschke express what do really think Mathematica users.

13
What to do when a new version comes out and renders questions obsolete?
12
Minor edits - are there reasons to avoid them?
92
Additional useful buttons for our M.SE editor
12
Can/should we ask about how some function in Mathematica compares/differs to/from a similar function in another language?
12
Review queues for questions must show existing answers
11
A few links made with the Ref button from halirutan's button plug-in no longer valid
33
Community Knowledge Exchange day 2016